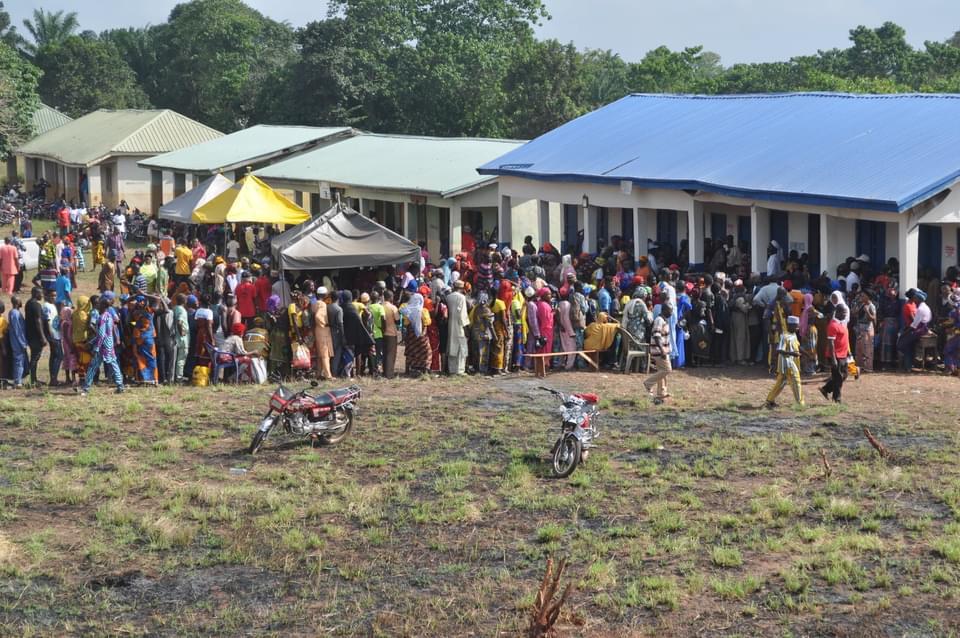 Two humanitarian groups – Odumehaje Christian Medical Mission, OCMM and Raymond Akor Memorial Foundation (RAMF), have embarked on a four-day free medical outreach to Agaliga-Efabo community in Olamaboro Local Government Area of kogi state, Nigeria.
Chairman and CEO of OCMM, Dr. Paul Odumu explained during the philanthropic exercise, that the event is to ensure help is given to those in need, and the message of hope preached to the people.
The consultant family physician with the 44 Army Reference Hospital, Kaduna, further pointed to the fact that, the historic activity was to put smiles on the faces of those who needed healthcare but could not afford it.

He urged Nigerians, especially the well- to- do and those in Diaspora to pull their resources together toward providing help for the poor indigent ones, saying that would help to reduce the numerous health challenges facing the country.
The CEO Raymond Akor Memorial Foundation, Mrs. Helen Akor pointed to the fact that, the outreach was organized to mark the two-year memorial of late Mr. Raymond Akor whose passion before his demised was to organize a free medical care for rural communities, particularly his country home as part of his retirement plan..
According to Mrs. Akor, 159 free general surgeries were recorded, with 148 dental surgeries, and 1,140 consultations among others during last year’s free medical exercise, which was a great help to the poor in the community, and this prompted the decision for the second intervention.

Expressing worry over the poor state of the primary health care facility in the community, coupled with the myriads of challenges faced by the people, Helen said it was pertinent for spirited individuals, government and corporate organizations to leave no stone un-turned toward partnering and providing them with the needed resources that would enable them assist the less privileged in their midst.
‘’we need support, as you can see, the crowd is massive, look at this Primary Healthcare Centre that is serving about eleven thousand people in this community with nothing to write home about, even the staff are hardly remunerated, and as a result, hardly come to work’’,
‘’we call on individuals and organizations to give us that needed support, and every support would be properly accounted for, this is because the outreach team has a very solid data management system that deals with data collection, processing and analysis to make vital information available for research purposes and accountability’’, she explained.

The services rendered during the outreach included: medical consultations, general surgeries, laboratory investigations and dental care and surgeries, along-side focused health talks, counseling and.preventive care for pregnant women and under five children.
During the exercise, beneficiaries comprising the young, the aged,pregnant women and children, gathered as early as 7 o’clock at the Primary Health Care facility where the free medical outreach took place, awaiting consultations by the health personnel.

Those with critical health challenges were seen being carried to the venue by their loved ones, while patients were grouped into different categories according to their health challenges after registration, and attended to by medical experts.
General and focused health talks on adequate nutrition, HIV and hepatitis, personal hygiene, covid-19, hand washing, malaria in pregnancy and child immunization, among others were given.
A volunteer nurse, who is a matron with the Kaduna state university teaching hospital, Mrs. Esther Ajeh, said during the exercise that it was right for them to take advantage of the outreach to enlighten pregnant women on how to eat and live healthily to ensure the safety of their lives and that of their unborn babies during and after delivery.
Nurse Esther, who stressed the need for a balanced diet to the pregnant women, noted that, it could be achieved using the available local foods within their environment, without necessarily going beyond their means for expensive foods.

Also speaking about the focused health talks, OCMM Co-Chair and Program Manager, Mrs. Martha Odumu said their interventions on pregnant women and under- five children became imperative due to the fact that most credible health experts were in the cities neglecting the people in the rural communities, which makes healthcare difficult to access, and this affects especially, women and children, resulting to high incidences of maternal and child mortality.
Mrs. Odumu explained further that, the humanitarian exercise was a follow up of the massive success recorded at the last year’s medical outreach, and it came this year with additional packages of medical and spiritual interventions that were not given last year.

A traditional titled holder, His Royal Highness, Chief John Onu Idako and the Ochai of Imane, expressed worry over the absence of government owned general hospital in the area, thanked the medical team and the sponsors for organizing such humanitarian exercise, saying the communities were in dire need of regular medical care to address their numerous health challenges.
Some beneficiaries, John, whose, wife was operated of an inflamed appendix, and Mr. Umaru, commended the organizers of the free medical outreach and called for more of such to combat the disease burden in the area.
They described the outreach as timely and God’s blessing for the community, as it was a complete package of both spiritual and physical healing for those with health challenges.

A missionary volunteer pen pusher for the groups, Mr. Daniel Karlmax said the event that took place between the 28th November to 2nd December, 2021 was in compliance with the COVID-19 safety protocols.